What is everyone's thoughts on Pirate Adventure? Is it something you'd love to see return, be replaced for another Thomas Land expansion, or have a dark ride/roller coaster placed inside the building?
C

Harry said:
be replaced for another Thomas Land expansion
Click to expand...

If they do make a Thomas Land expansion within the Pirate Adventure building. Many of the ride will benefit as they struggle with the outdoor temperatures and they're better functioning indoors. It'll have a bit of an Adventure Island or Fantasy Island vibe if they go along with this approach.

My feelings about Pirate Adventure are likely already known, but I do want to see it make a return.
Personally I don't see it going into a Thomas Ride, mainly because it is outside of the perimeter of Thomas Land, having that area enclosed gives a sense of security and I feel that this is a major attribute to the success of Thomas Land.

I will be sharing some exclusive photos I have of Pirate Adventure from the day it opened. Stay tuned and I'll announce them soon.
T

Well when the jungle palladium closed the frontage was removed keeping the show building.

Get them pictures up! I've been waiting since the last time lol
D

Monkeynips said:
Get them pictures up! I've been waiting since the last time lol
Click to expand...

Welcome back - we hope you like the changes we’ve made! The photos are all ready to go!

I look forward to sharing them - stay tuned for this and lots more exclusive content, announced both here and on our Twitter

Thank you, I look forward to it!

Has anyone ever noticed this? 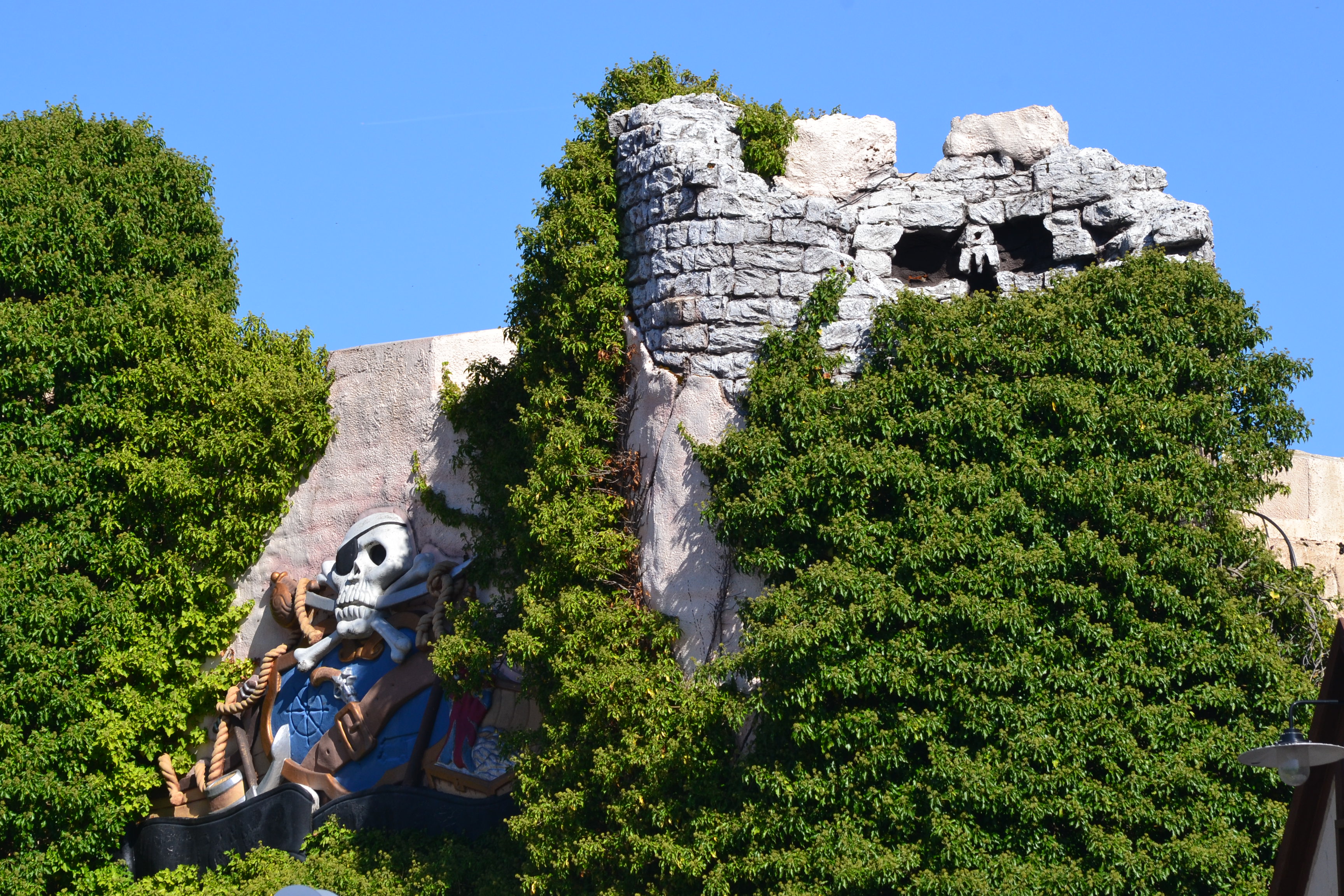 It is with great pleasure that we release these exclusive opening day photos of Pirate Adventure. These photos were taken from one of the first manned boats that travelled through the ride when complete, and was taken just before the public opening of the ride!

Below is the exterior of the ride, the ride is introduced by a band and a live pirate show, as well as Timmy Mallet - it is very unusual to see the impressive facade with no ivy growing over the front! Note the small ribbon on the front doors of the ride. 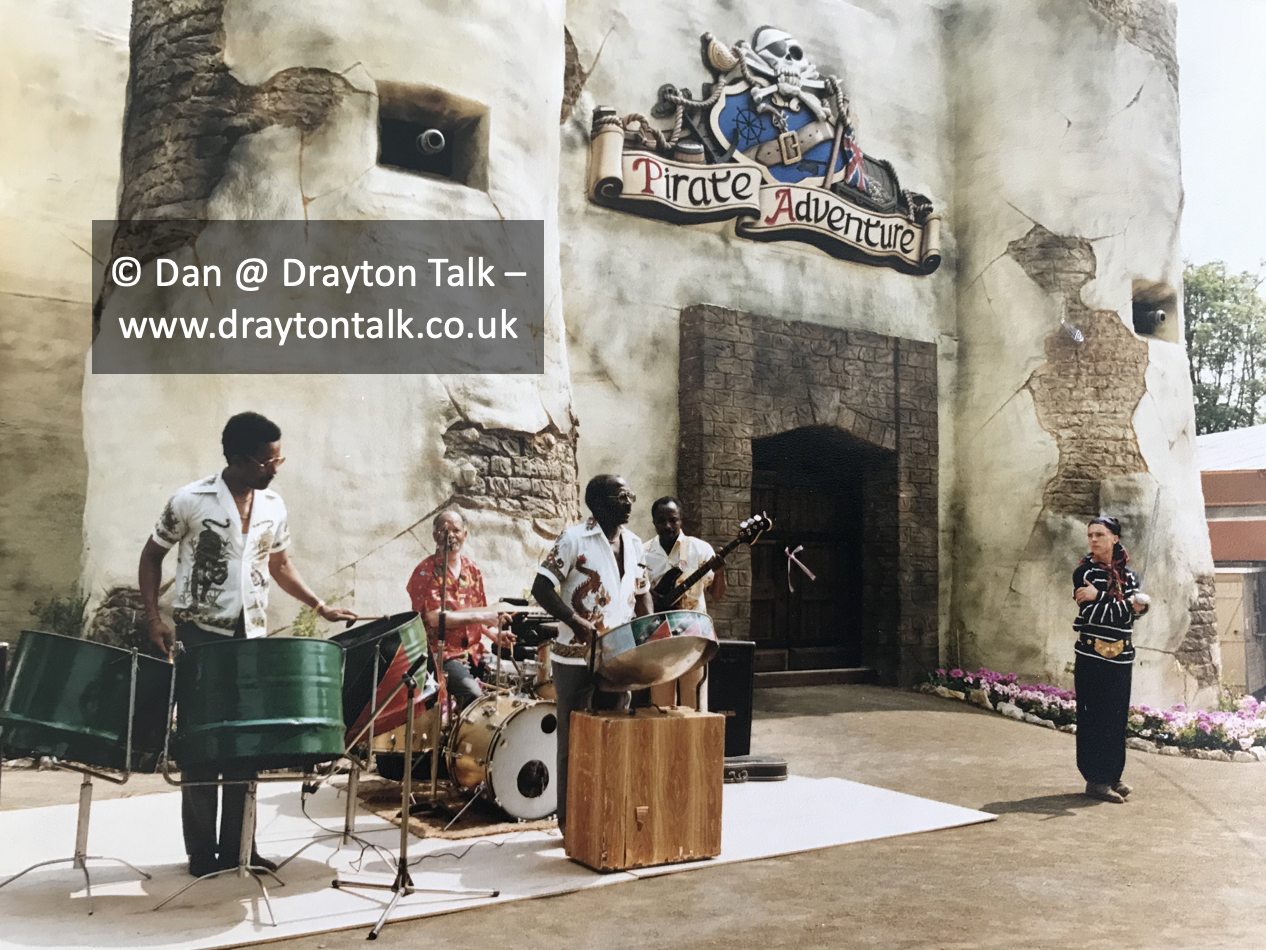 This is the headless Pirate Animatronic that was supplied with the ride, it was relocated twice within its existence in Pirate Adventure before being permanently moved to nearby attraction, The Crypt. Its current whereabouts are not known, this was operated with a three pin household plug. 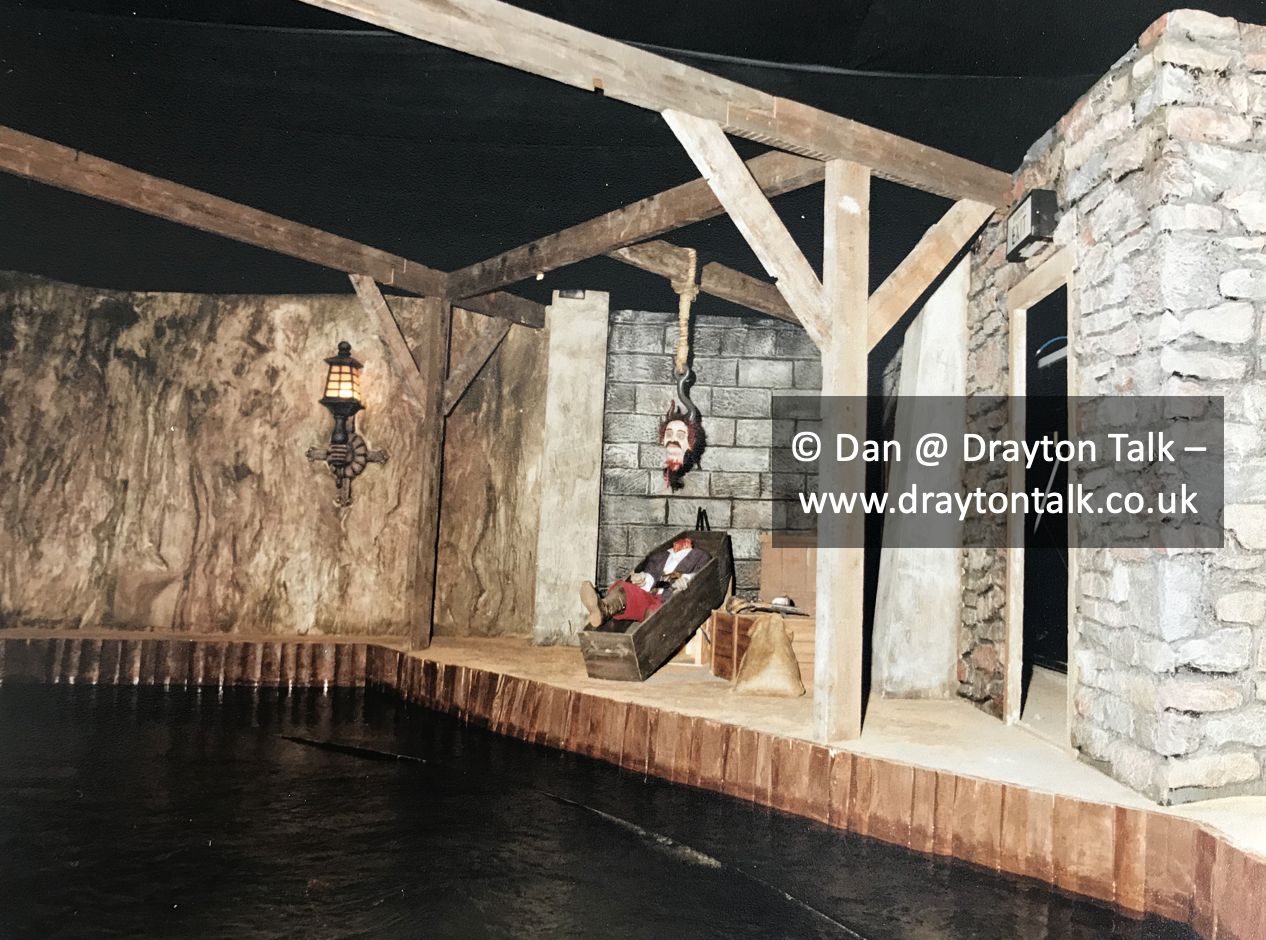 This scene is just left of the drop section on the ride, it is assumed that this is a council official warning the villagers of the inbound attack from Pirates which will later be seen on the ride. 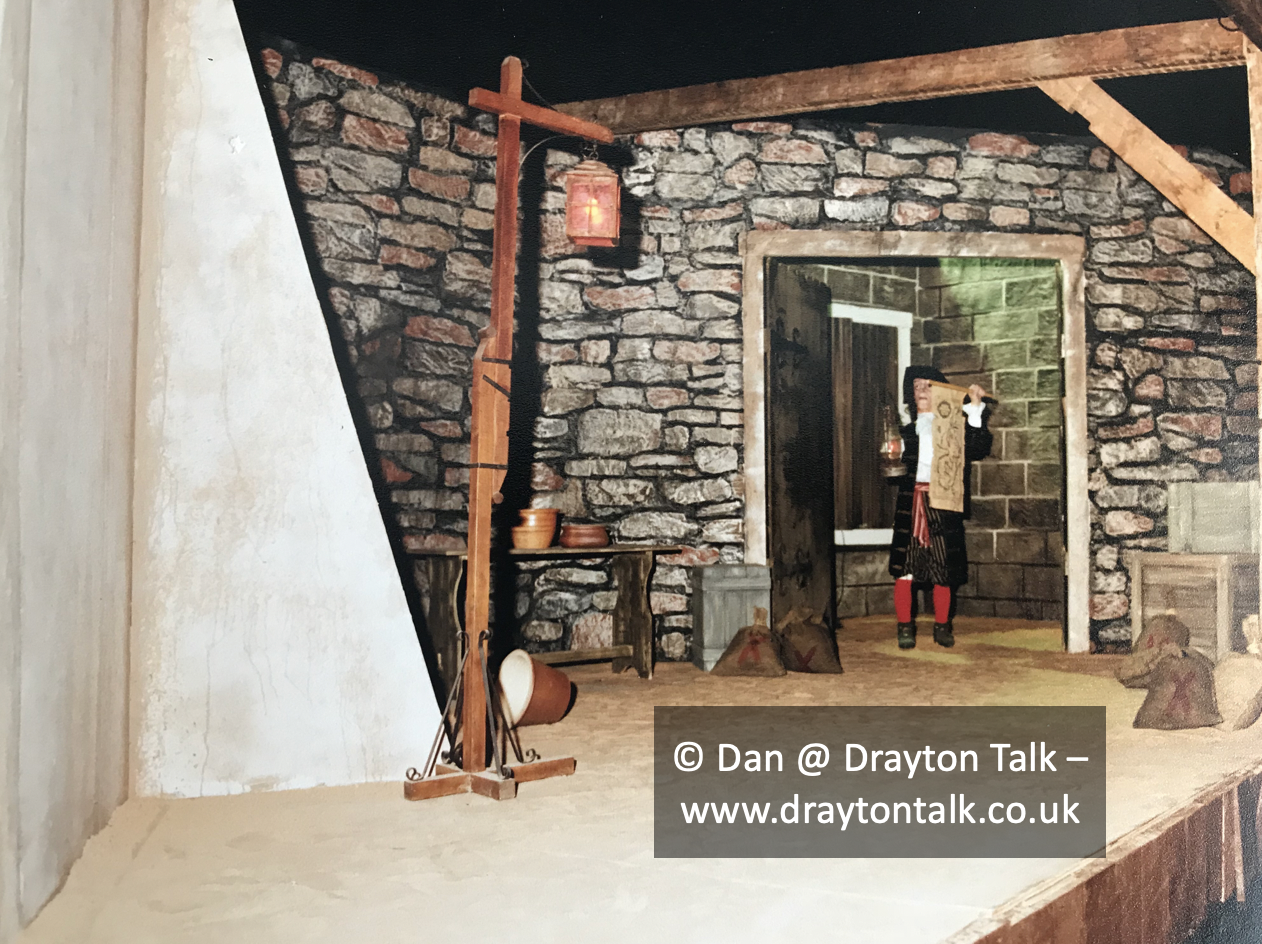 This scene is just after the drop section, in the village section of the ride, note the suspended houses, the one of the right containing a band playing music, this could be distinctly heard after the splashdown section. 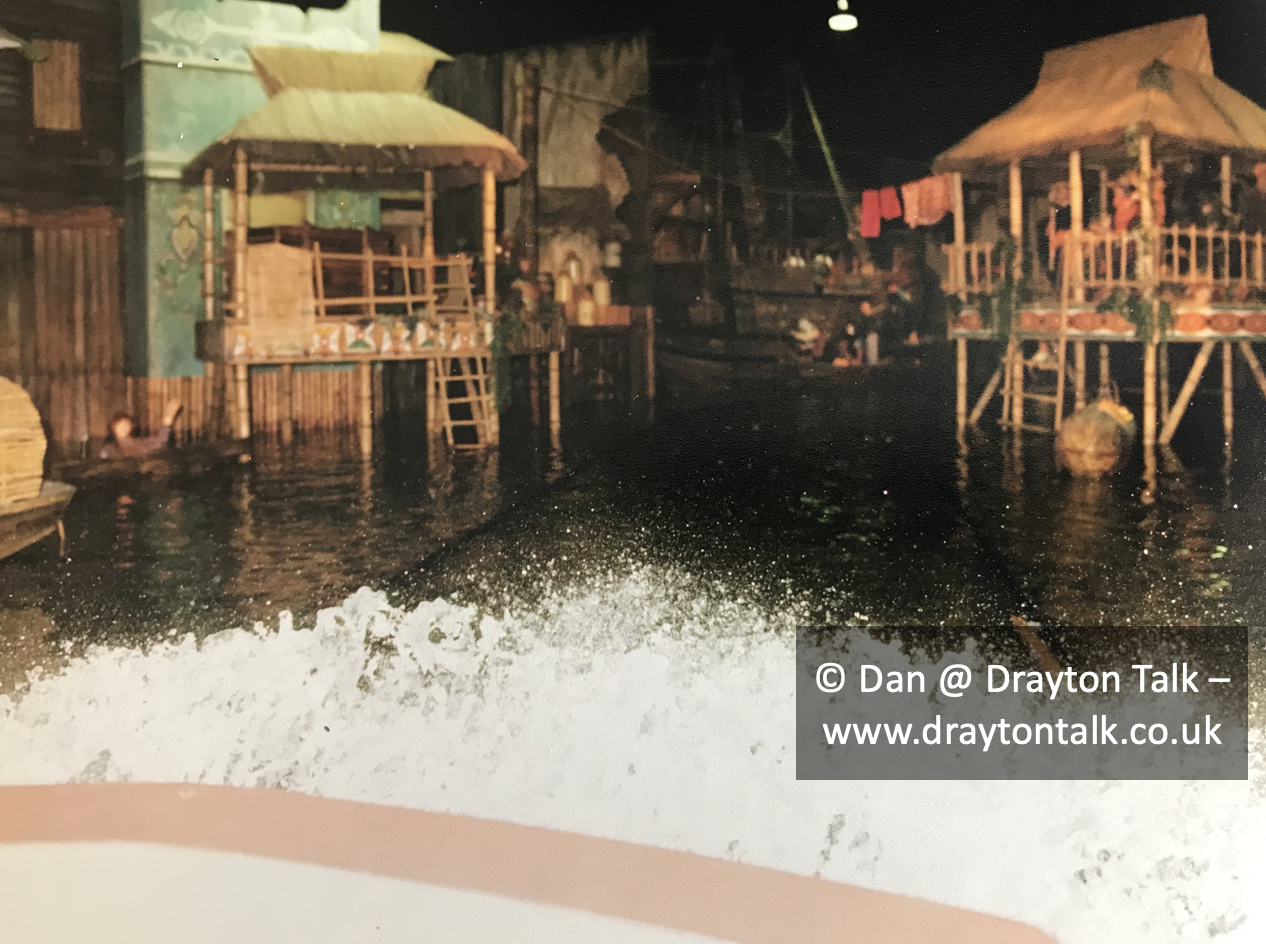 This is at the end of the second scene, where the villagers are seen building their boat and adding supplies, there were many moving figures on this set piece - note the photographer in the bottom left corner of this image. 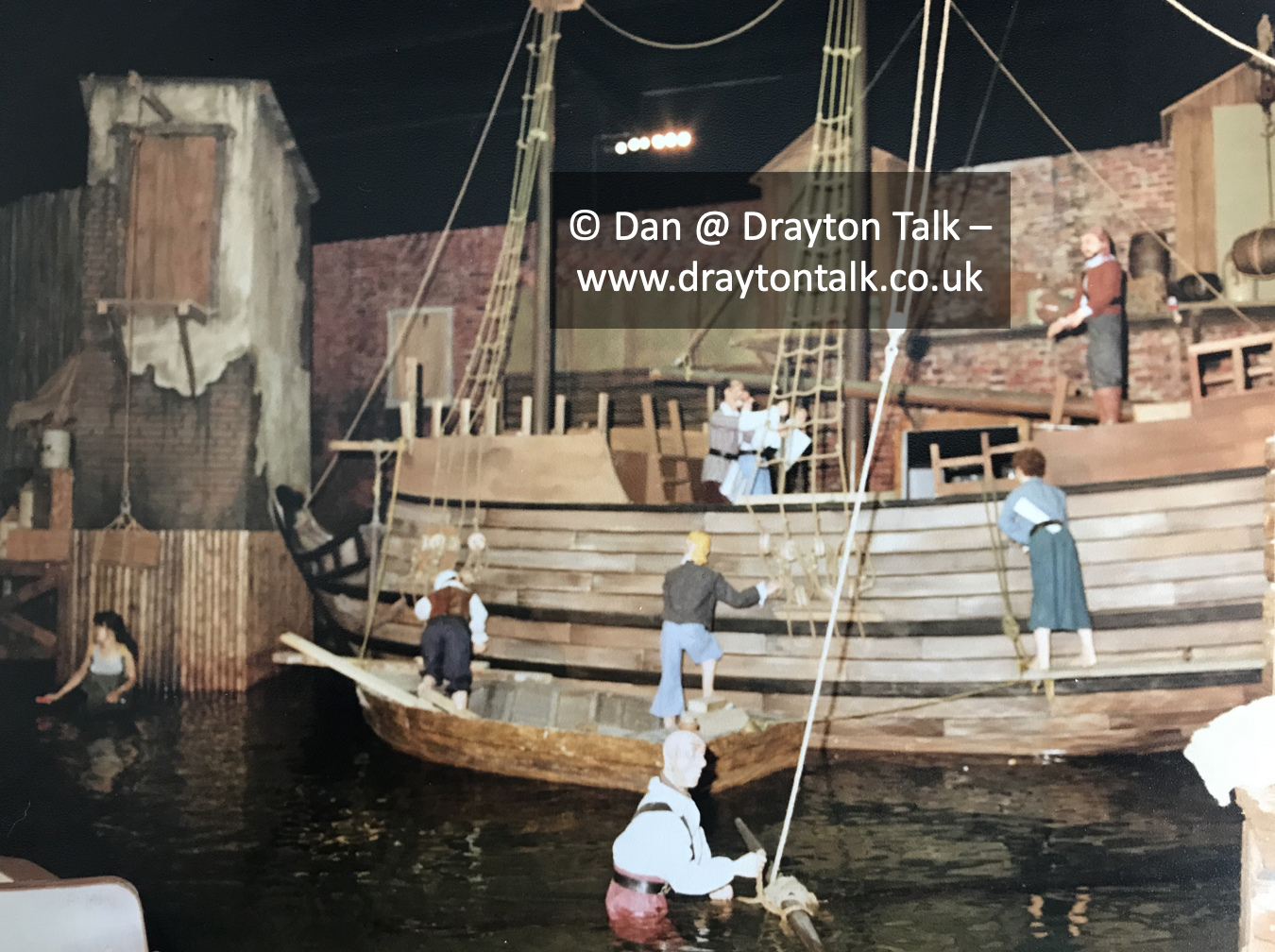 This is in the town invasion scene, the hand in the top left of the image is from an animatronic which would drop from the above bridge to scare riders, the pirate can be seen loading his boat with treasure before escaping, his head turns towards riders. 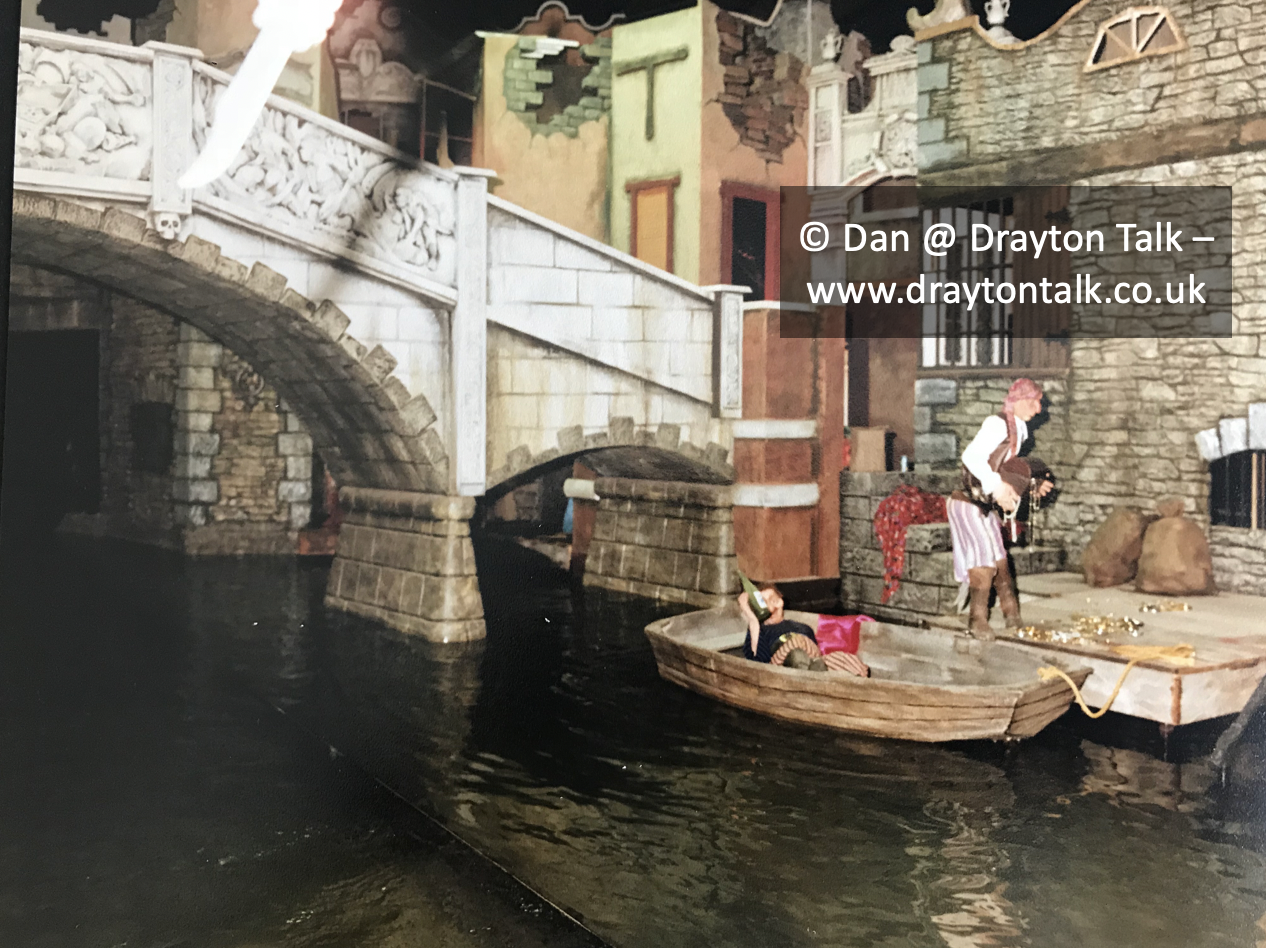 This image shows another set in the invaded town scene, this is where a pirate is throwing water over a villager, the animatronics must've been fully waterproof to withstand this! This is just before the entrance to the prison tunnel scenes and the circuit load / offload positions. 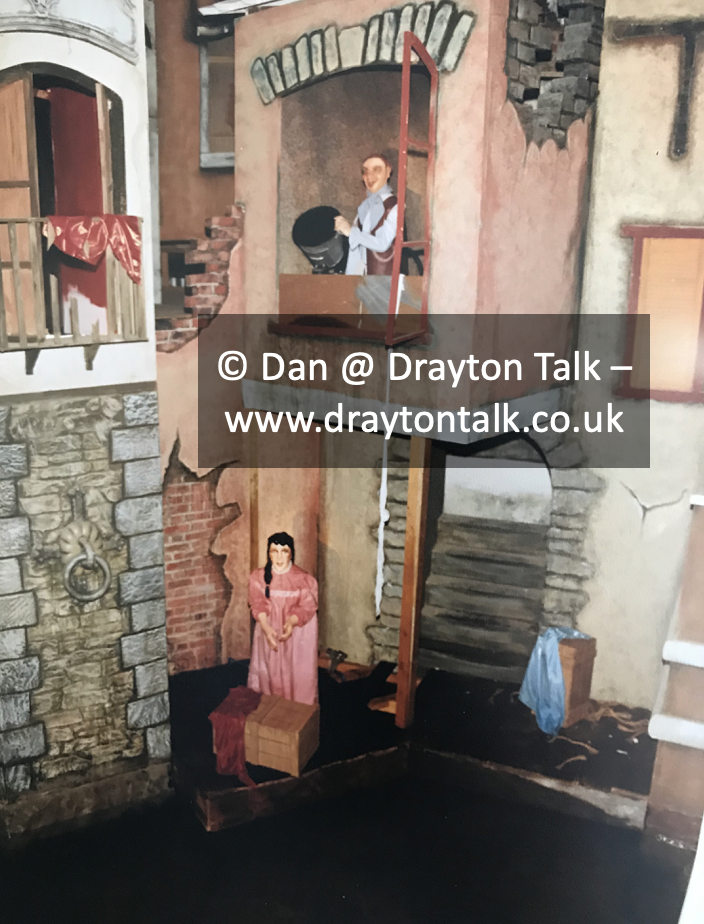 This is in the final battle scene after the prison tunnel section, here there is smoke from cannons, there would be water effects to splash riders and give the illusion that they are between a battle of villagers on land and Pirates on an impressive boat structure - this scene would include shouting and trumpet playing from an animatronic on the left side (which we have pictures of in archive). The entrance ahead is to the final tunnel section of the ride. 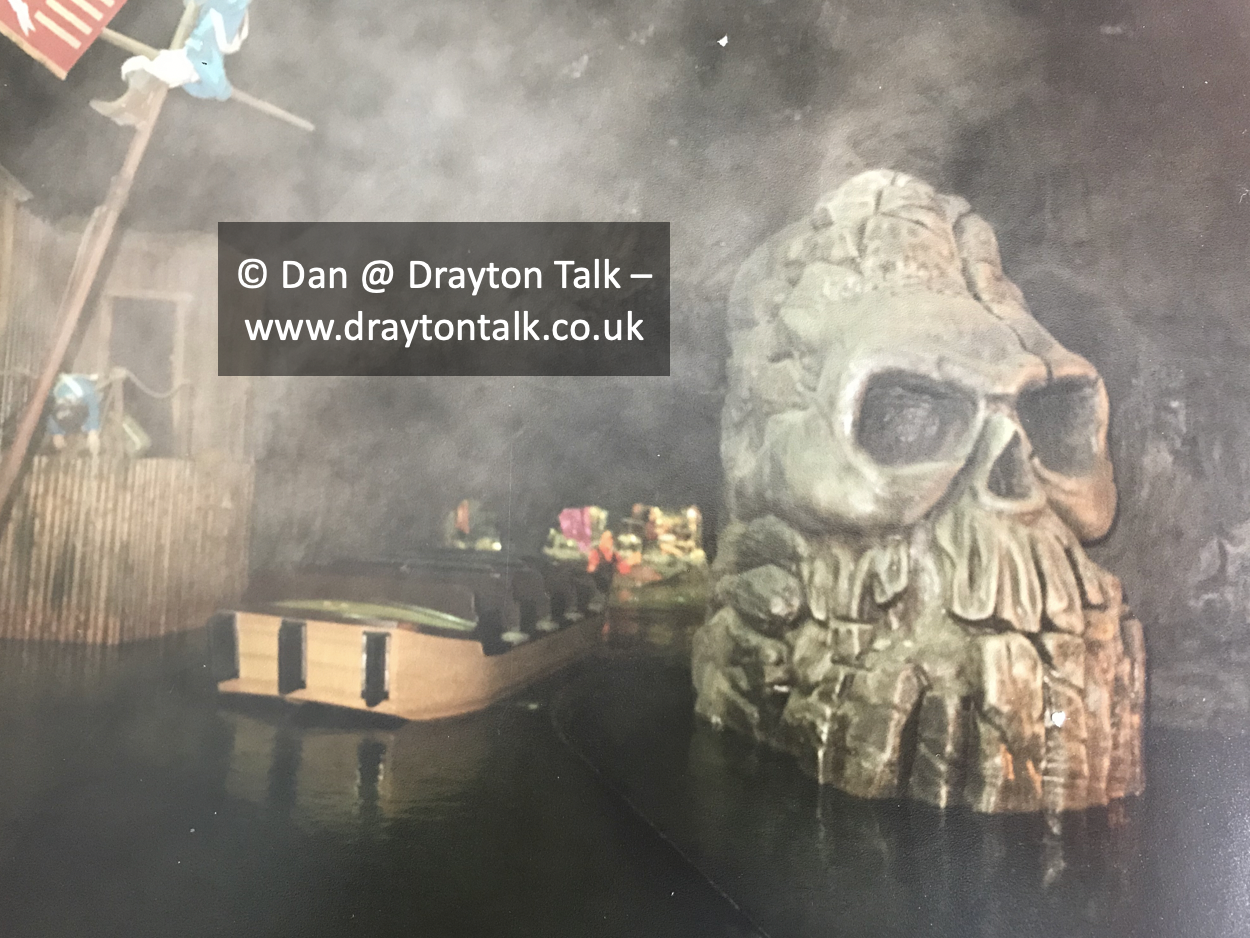 This scene is just on the entrance to the final section of the ride, it is an impressive scene with around 7 animatronics in action, including a pirate which would move in and out of the water, as well as a pirate which was lost in around 2006 who would bob up and down on the other end of the bench (see left-hand side). It is evident how impressive the rock-work is here, and also the detail in the set design, this is showing the pirates going into hiding with their treasure. Finally, this is the Ghost Pirate Scene which was lost to a fire in the ride in 2006, since then the scene was boarded off and maintenance lights were visible, this showed a collection of three ghost-like pirates, this effect was very much ahead of time when the ride opened. The fire is often attributed to the downfall in maintenance of the ride. Not many, if any, photos exist of this scene. Some of the Pirate Adventure boats behind the Sodor Railway engine shed. These are two refurbished boats that can be seen. Photo was taken when traveling on the train to Tidmouth Hault

Those pictures are phenomenal. I do hope it’s comes back. Yes it can be seen as a knock off Pirates of the Carribean at Disney. But it was something else and timeless. Sad to think that 25+ years later modern UK dark rides seem to only focus on tacky gimmicks that don’t last! Luckily Drayton haven’t/ I don’t expect them to go down that route! 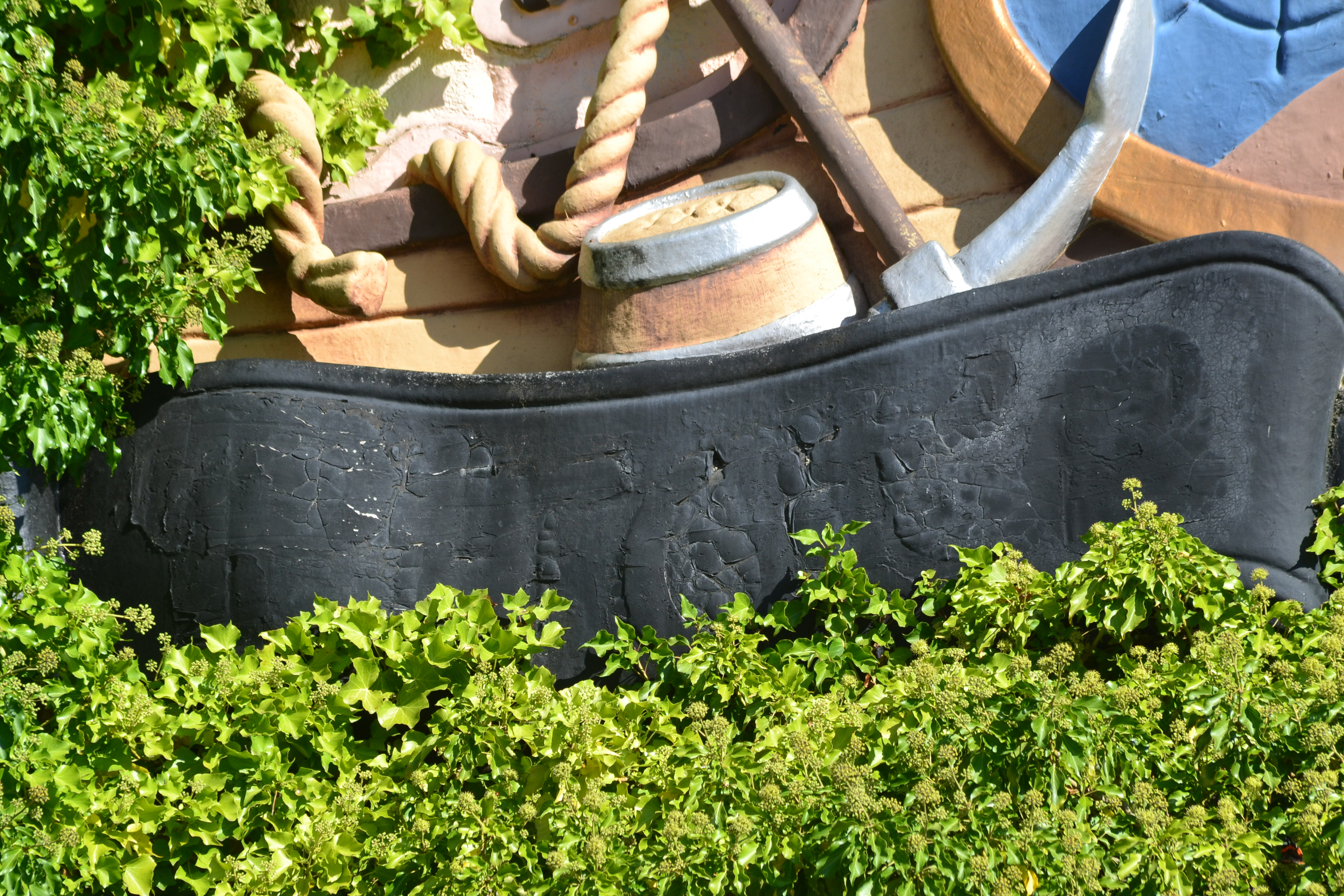 This was such a great ride, I'd say it's in my top 3 of drayton's rides of all time. I've been on 2 of the Disney Pirates rides (Orlando and Paris) and Drayton's take on it was just as good, not as polished maybe but the experience was fantastic .. hope it comes back one day.
D

ClickTechUK said:
This was such a great ride, I'd say it's in my top 3 of drayton's rides of all time. I've been on 2 of the Disney Pirates rides (Orlando and Paris) and Drayton's take on it was just as good, not as polished maybe but the experience was fantastic .. hope it comes back one day.
Click to expand...

I’m glad to see you’re a fan, and I hope the pictures were nice reminiscence. It really is a phenomenal ride to have in a UK Park, it’s so impressive. Perhaps it wasn’t as polished as Disney’s Pirates of the Caribbean but I’d say it puts up competition, and it’s great for families who perhaps can’t get out to Disney.

It’s also different for the UK Theme Park Industry, it’s not often investments like this are made. It’s such a large space at the park and it’s so important to many fans, as it should be to the park.

What was your favourite scene? 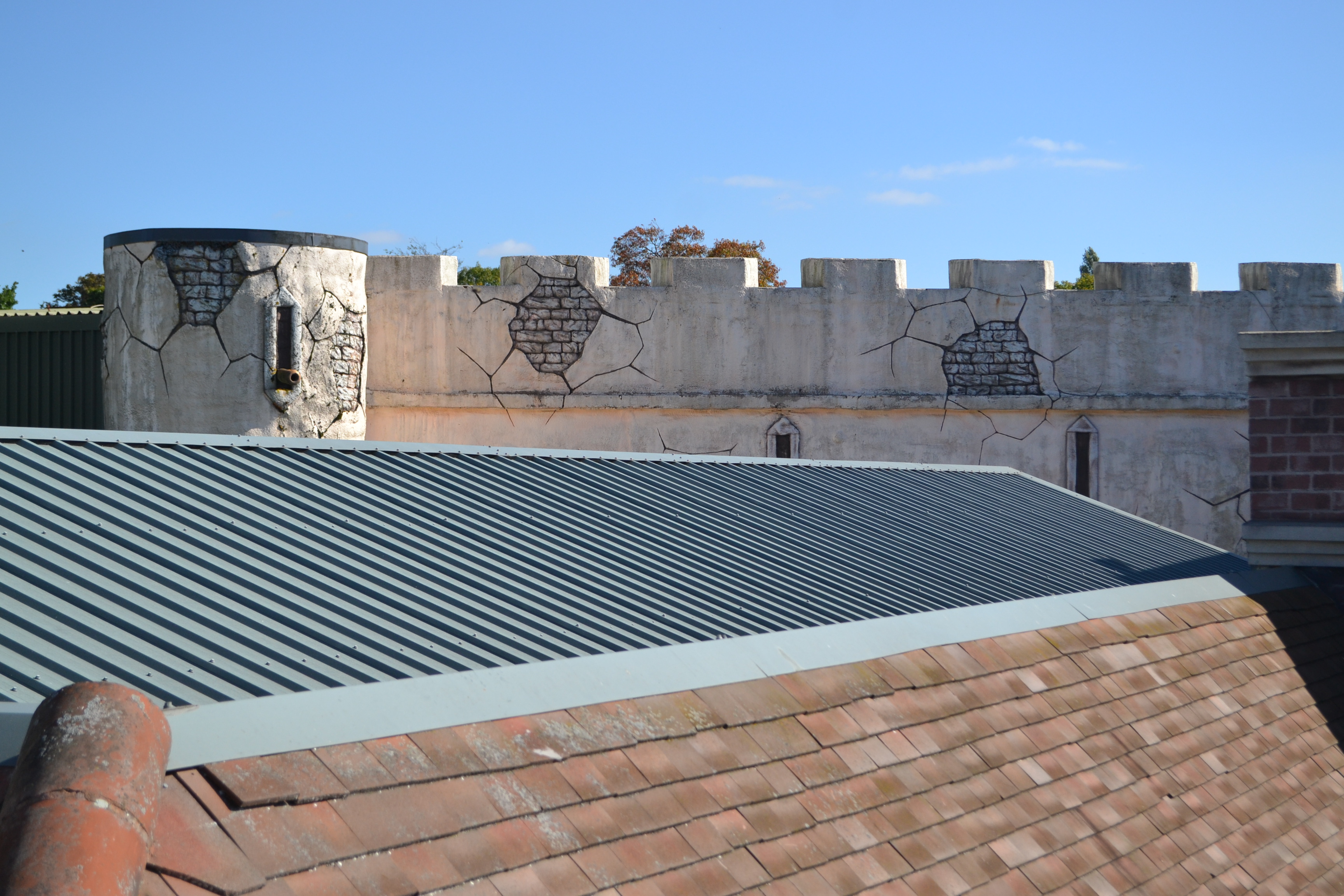 Dan said:
...It’s also different for the UK Theme Park Industry, it’s not often investments like this are made. It’s such a large space at the park and it’s so important to many fans, as it should be to the park.

Absolutely. I'm surprised not more of this type of family ride exist in the UK.

I always liked the scene with the big ship attacking the town.
D

That's a great scene! Did you know that the scene with the woman hitting the man with the brush used to be in the first section and not the prison tunnel section? The man was also positioned in the water rather than behind some obstacles - this was one of the most reliable scenes in the ride and was powered by a three-pin plug!

Also, lots of animatronics like Peg-Leg Polly (both versions), the fighting pirates, etc. were added in a remedial update later on in time? And many animatronics were moved to the nearby Haunted Crypt when it had a minor face-lift by Farmer Studios!
T

Isn’t the last figure in the prison uniform just before you turn back into the station of Sheiff showdown from the pirate adventure?
You must log in or register to reply here.
Share:
Facebook Twitter Link
Top